Institute Pasteur use Qlucore to understand the immune system

“By being able to look at a lot of data at one time, you see the global picture. Without that we would never have seen this switching between phenotypes”

Our immune system is a complex network of cells and organs that together defend the body against harmful foreign invaders such as bacteria and viruses. Inflammation is a normal, controlled part of these defences but sometimes this control breaks down to cause immune-mediated inflammatory diseases such as spondyloarthritis (SpA), psoriasis, Crohn’s disease (CD), and rheumatoid arthritis (RA).
These diseases affect around 7% of the population worldwide and often strike at a young age causing lifelong illness. This represents a considerable burden for the affected individuals and society.

Dr Elisabetta Bianchi’s Immunoregulation group at the Pasteur Institute in Paris is studying the role of a subset of Th lymphocytes called Th17 cells in Ankylosing Spondylitis (AS), a type of Spondyloarthritis that affects the spinal joints and causes severe chronic pain and functional impairment. Long term, Dr Bianchi hopes that this work will help to guide the treatment of patients suffering from immune mediated diseases such as AS.

Dr Elisabetta Bianchi, a senior staff scientist at the Pasteur Institute in Paris, France is using Qlucore’s Omics Explorer to study a subset of Th lymphocytes, called Th17 cells, which are involved in chronic immune-mediated inflammatory diseases.  Her team has been using the tool for nearly a decade mainly for analysing gene expression data.

It was thought there were only two subsets: Th1 cells that produce interferon gamma for defence against intracellular pathogens, and Th2 cells, which produce interleukin IL-4, IL-5, IL-13 involved in the protection against parasitic infections.

Th17 cells were discovered in 2006. They secrete IL-17, IL-21, IL-22, and IL-26 in humans, and contribute to immune responses against extracellular bacteria and fungi.

“We use Qlucore as a first step to get an overview of the data, and to identify deeper questions we should be asking,“ says Dr Bianchi. “I start with a PCA [principal component analysis], as a first quality analysis of the samples and to start identifying patterns in the data. We then perform statistical analysis and visualize the data using a heatmap.”

Dr Bianchi continues “Before we had the Qlucore tool, the group was analyzing data on a smaller scale. We would focus on a few genes and we could analyse them using Excel and Graphpad. Now that we carry out large scale analyses that generate more data, Qlucore is vital.” 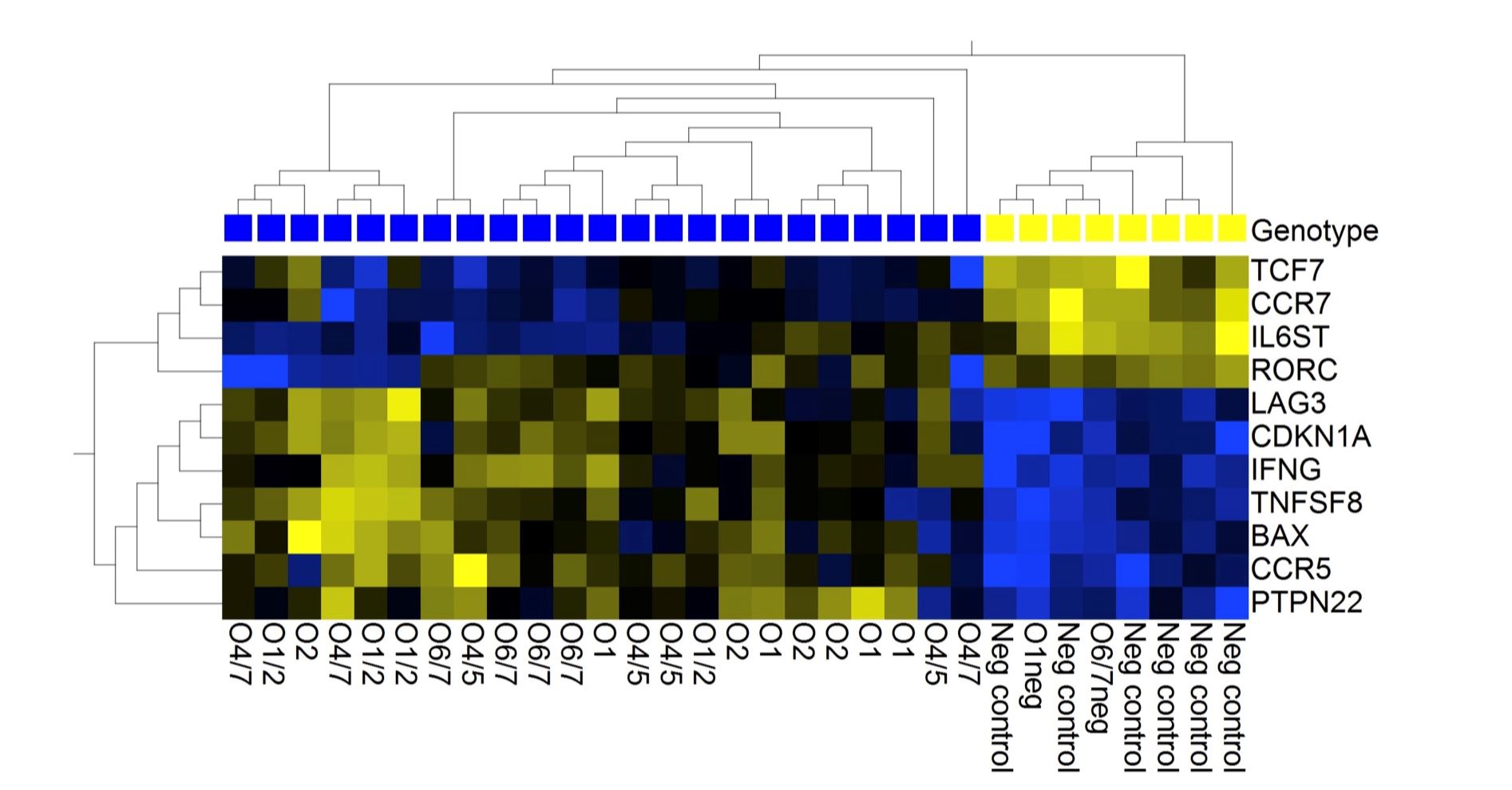 Recently, the group has used Omics Explorer to understand how the transcription factor RORγt (encoded by the RORC gene) modulates Th17 polarization and function.

In a paper published in *Nature Communications Dr Bianchi and her team have defined several regulatory elements at the human RORC locus in thymocytes and peripheral CD4+ T lymphocytes, with CRISPR/Cas9-guided deletion of these genomic segments supporting their role in RORγt expression.

“If we stimulate T lymphocytes with different cytokines that induce the differentiation of Th17 cells, we know that the cells will express the Transcription Factor RORγT, but we didn’t know exactly what are the pathways and the transcription factors that induce RORγT in humans,“ she says.

As well as analysing the expression of RORγT,  the team analysed a panel of 450 immune related genes using Nanostring technology, and used Qlucore Omics Explorer to look at the results.

“We found that by deleting the regulatory regions that we thought might have enhancer activity for RORγT expression, RORγT levels were strongly reduced,“ explains Dr Bianchi.

“We ended up with cells that looked like Th1 cells that make interferon gamma. It was a surprising result but one that confirms observations by other scientists that Th1 and Th17 lineages seem closely related.“

Dr Bianchi hypothesises that the Th1 phenotype may be the “default” pathway of T helper cell differentiation; it is much easier to get cells to make interferon gamma than to make Il-17 differentiation.

“It meant we could look at the full panel of 450 genes and identify which genes were differentially expressed, and we found an increase for genes expressed by Th1 type-cells.”

She adds: “By being able to look at a lot of data at one time, you see the global picture. Without that, we would never have seen this switching between phenotypes. We would have focused on RORC2 and simply said, the gene is expressed less. We would not have seen that these were two different types of cell”.

For future research, the group is moving away from Nanostring technology to RNA sequencing. “We will be working with much larger datasets of thousands of gene expression profiles,“ explains Dr Bianchi. “It’s a different order of magnitude of data but we can still use the same Qlucore tool in the same way to get a sense of what’s going on, and which direction we need to go with our research. It is very powerful.”